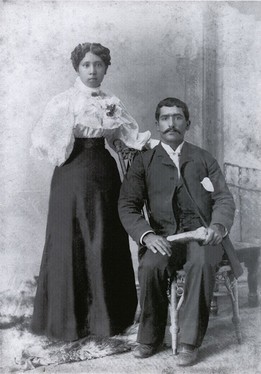 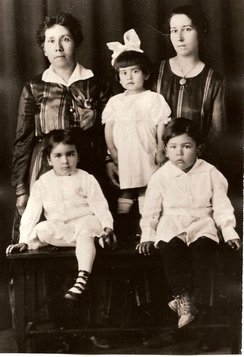 The first photo is of the marriage of Luis Emeterio Alvarado and Ziola Esperanza Courtney, 1 August 1898, Pomona, Calif.

The second photo: This is an interesting photo of mother and daughter with their children. Zoila Courtney-Alvarado (back row on left) and her daughter Beatrice Margrett Alvarado-White. Children are left to right, Pearl White (b. 1915), Ruby White (b. 1916) and Jose Maria Alvarado (b. 1916). Jose Maria (named after his grandfather) is the little brother of Beatrice. Beatrice and her mother both had children born the same year. I would guess this photo was taken about 1919. They lived in Lompoc, Calif. at the time of this photo.