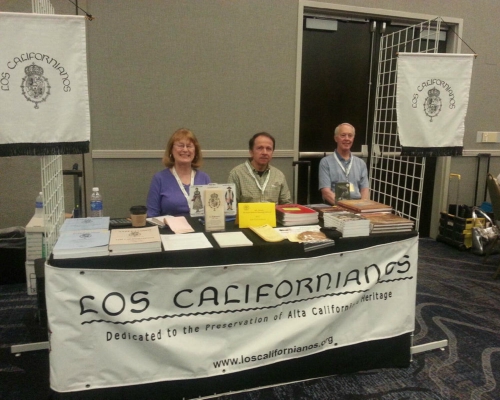 As stated in Article II of the Los Californianos Bylaws, the purpose of this organization shall be:

​manning a booth at the SCGS Jamboree.

In December 1968, a small group of descendants of Spanish Alta Californians formed Los Californianos in anticipation of the bicentennial year of the discovery of San Francisco Bay in 1769 by the expedition led by Don Gaspar de Portolá.

Los Californianos was created for the purpose of preserving the heritage of Alta California’s early Hispanic Californians (also called Californios or Californianos). As individuals and as an organization, we conduct research on genealogy and civil, religious, military, and cultural activities in Alta California. We strive to ensure that an accurate and authentic oral, written, and pictorial interpretation of the history of Spanish and Mexican Alta California is provided to the public, especially to our fourth-grade students who study California history as part of their curriculum.

Los Californianos annually commemorates the arrival of the Juan Bautista de Anza Expedition (1775-76) to San Francisco in June 1776. Descendants of the founding families of San Francisco will celebrate the 245thanniversary of the arrival of Spanish soldados de cuera (“leather-jacket soldiers”), men, women, and children, who made the long journey overland to San Francisco and founded El Presidio de San Francisco and Mission San Francisco de Asis (Mission Dolores). Traditionally, this outdoor celebration, open to the public, takes place at the Presidio of San Francisco at the Flagpole near the historic Officers Club. During the Roll Call of Anza expedition members Descendants commemorate their Californiano ancestors by placing a flower in a special display. Join us for music, horses, and re-enactment. Period Clothing is welcome (Soldado, Vaquero, pioneer, military). Los Californianos has been partnering with the U.S. National Park Service ( http://www.anzahistorictrail.org/visit/counties/san-francisco and https://www.presidio.gov/trails/juan-bautista-de-anza-national-historic-trail ) and the Presidio Trust (
https://www.presidio.gov/visit/presidio-visitor-guide ) . Reservations for the Los Californianos luncheon program must be made in advance. 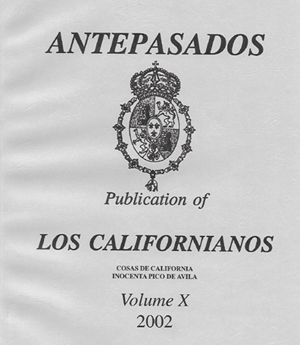 Each quarter we publish Noticias para Los Californianos (News for Los Californianos), a newsletter for our members. In addition to updates on our organization and announcements on our activities, we feature articles on the history and heritage of Alta California and the genealogy of our ancestors.

Periodically, we publish Antepasados (Ancestors), a longer scholarly work. To date, we have published 14 volumes. Current copies of both Noticias para Los Californianos and Antepasados are provided at no cost to our members and are also available for everyone to read in our Traveling Genealogy Library. 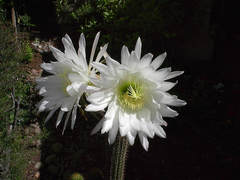 Los Californianos’ logo was designed by members Nancy and John Henshall in 1971. It contains some of the elements of the coats of arms of some of the kings of Spain, notably Carlos III who was king from 1759 to 1788 when colonization of Alta California was begun.

The arms are surmounted by an open royal crown (as opposed to a closed imperial crown.) The gold crown has four open arches of pearls, and the whole is surrounded with the collar of the Order of the Golden Fleece. The gold collar shows eight red flames coming out from blue flint stones. Suspended at the bottom of the collar is a ram or fleece.

The lions and castles representing Castilla and León have been in the Spanish coat of arms since the marriage of Los Reyes Católicos Fernando e Ysabel in 1469 and their ascent to the throne in 1474.

The reason Fernando e Ysabel made Cristobal Colón (Columbus) wait seven years before underwriting his plan to reach the East by sailing West is because their first and primary goal as Catholic monarchs of that time was to rid Spain of the Moors and the Jews.

Muslims entered Spain from North Africa in 711. They conquered all the way north to Tours in France. There they were defeated in 732 by Charles Martel (Charles the Hammer), and driven back across the Pyrenees into Spain. The Moors were in Spain for 781 years. The Reconquista was completed on January 2, 1492 with the fall of the Kingdom of Granada. The Moorish King Boabdil surrendered to Fernando e Ysabel. He and his people were sent “in tears” back to North Africa. So, the pomegranate was added to the coat of arms in 1492.

Carlos III added the fleurs-de-lis, because he was a Boubon or Borbón as they say in Spain.
​
The Order of the Golden Fleece was established in 1430 by Philip the Good, Duke of Burgundy. In 1477, because there was no male heir, the Grand Mastership passed to the House of Habsburg. In 1516, it passed to the Spanish branch of the House of Habsburg. Its members have been Burgundian, Austrian, and Spanish. The order still exists today in Austria and Spain.

The Duchy of Burgundy was annexed by the French crown after the death of Charles the Bold in 1477.